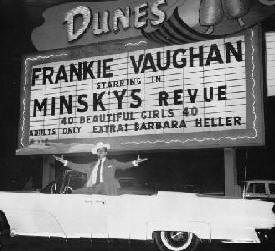 We know that the Sin City of the 40s featured the brothels and sawdust joints downtown, but when did the bare skin make it to the Strip?

The Dunes was the first casino in Nevada to offer a topless show. It debuted in 1957 and was named Minsky’s Follies. This extravagant revue was modeled after a Parisian nightclub show and played nightly at the Dunes in the Arabian Room.

It was a SMASH hit, setting records for attendance and helped to scrape the struggling casino out of red numbers. The uproar from local Catholic priests and others was largely ignored by owners considering the show was bringing in high rollers to see the wholesome entertainment.

The show played for the next four years as other casinos on the Strip began reproducing the model created by the Dunes.