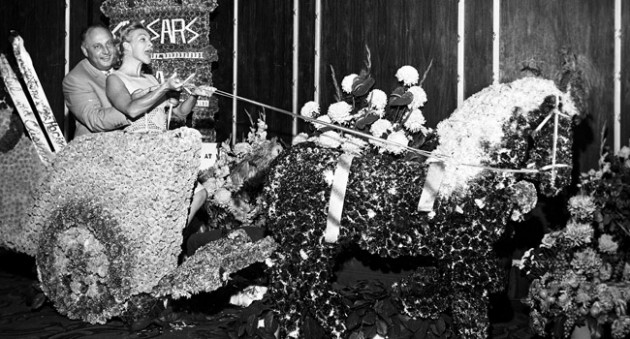 When Jay Sarno began constructing his casino on the Vegas Strip, he struggled to come up with a fitting name for it. He originally liked Desert Palace, but eventually decided on Caesars Palace because he wanted guests to think of royalty when in his casino. To that end, he named it “Caesars” and not “Caesar’s” because he wanted every guest to feel like a Caesar while in his hotel.

The doors opened on August 5, 1966 and writer George Stamos said that “it was a grand opening that was befitting a modern emperor of Rome.” Andy Williams headlined in the Circus Maximus Showroom and loved it so much he played the room for the next 12 years.

Sarno sold the Caesars in 1969 and used the money to open the Circus Circus, in which he himself would eventually dress up and serve as ringmaster of the circus. He eventually retired from the Circus Circus only to begin planning his third major project, the Grandissimo. However, he died before he could open his final venture in Vegas.

Movie buffs and fans of Scorsese’s Casino will remember the name Nicky Santoro, played by Joe Pesci. This character was based off of real mobster, Tony “The Ant” Spilotro, who convinced Sarno in his Circus Circus days to allow him to open a store in Circus Circus. Rumor has it that once Sarno discovered Spilotro’s connections and “business style” he forced him out of Circus Circus for good.

Editor’s Note: Be sure to check out Dr. Dave’s new book, Grandissimo!