I always enjoy reading and hearing Vegas trip reports. It’s a nice way to keep up on what’s going on in town while also making yourself a healthy bit of jealous of the person that took the trip. I just got back from a very short 3-day-2-night trip to the Valley, and I thought I’d share a few of my exploits, complete with some photos.

Most of my trips to Vegas are either solo or with the boys. This time my wife joined me, which was neither good nor bad. Just different. There are many sides of Vegas, and the one I experience with my wife is always far different than the one I experience with the boys. All night sessions throwing dice are replaced with fine dining, shows, and cocktail lounges. Like I said, neither good, nor bad. Just different. And equally fun.

We stayed at the Cosmopolitan on the 40th floor. I attempted the $20 trick to upgrade from our Terrace Suite to a Wraparound Terrace Suite, but to no avail. In the clerk’s defense, she made three phone calls and disappeared to talk to her manager before saying the hotel was just too full for Valentine’s Day Weekend, President’s Day Weekend, and the sold out Bruno Mars concerts on the property. Understandable. She slid the $20 bill back to me and said that she felt badly she couldn’t upgrade us, but would be happy to give us a Bellagio Fountain view. 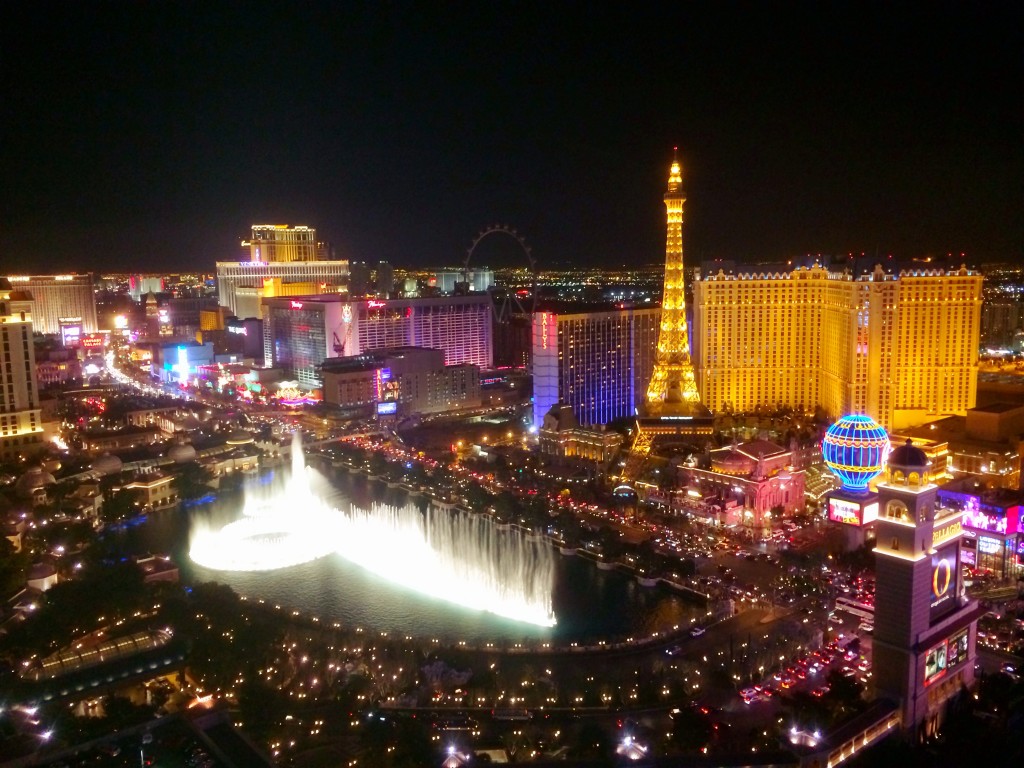 We hit Book & Stage for some video poker (lost), but had several lovely cocktails made by the terrific bartenders there. One recognized me from a previous trip which is either very cool or kind of scary. The drinks were nameless as we told him to make us a tasty gin drink and a tasty tequila drink. He passed our challenge with flying colors.

Then we were on to the Aria because my wife had never seen it. We walked around the property, playing several machines (lost), indulging in a couple beers, and eventually landed at Todd English P.U.B. right outside the Aria entrance (but attached to the Crystals). We are both craft beer lovers, so I was happy to hear that we were there for Happy Hour (1/2 off beers and $1 wings). At the urging of the waiter, I had the Sculpin IPA by Ballast Point Brewing. It was awesome. Wings were also very tasty. The beers are pricey, but the selection is terrific and happy hour makes the prices reasonable. Definitely recommend it.

We were then off to take in a show — Absinthe at Caesars. I have seen several Vegas shows, including live performances and Cirque productions, but never anything quite like Absinthe. It was a blast. Raunchy performers, feats of strength, hilarious monologues, and terrific improvisation. I definitely recommend it for any person that is not easily offended. 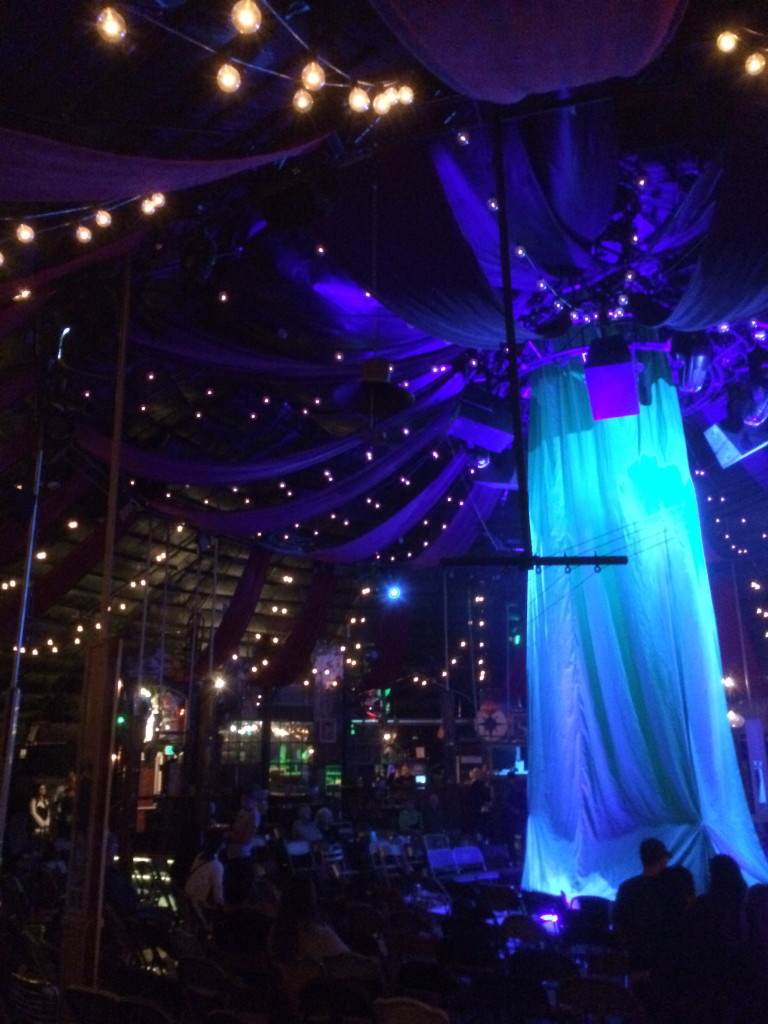 The 8-foot stage inside the Absinthe theater makes it very intimate and very cool. 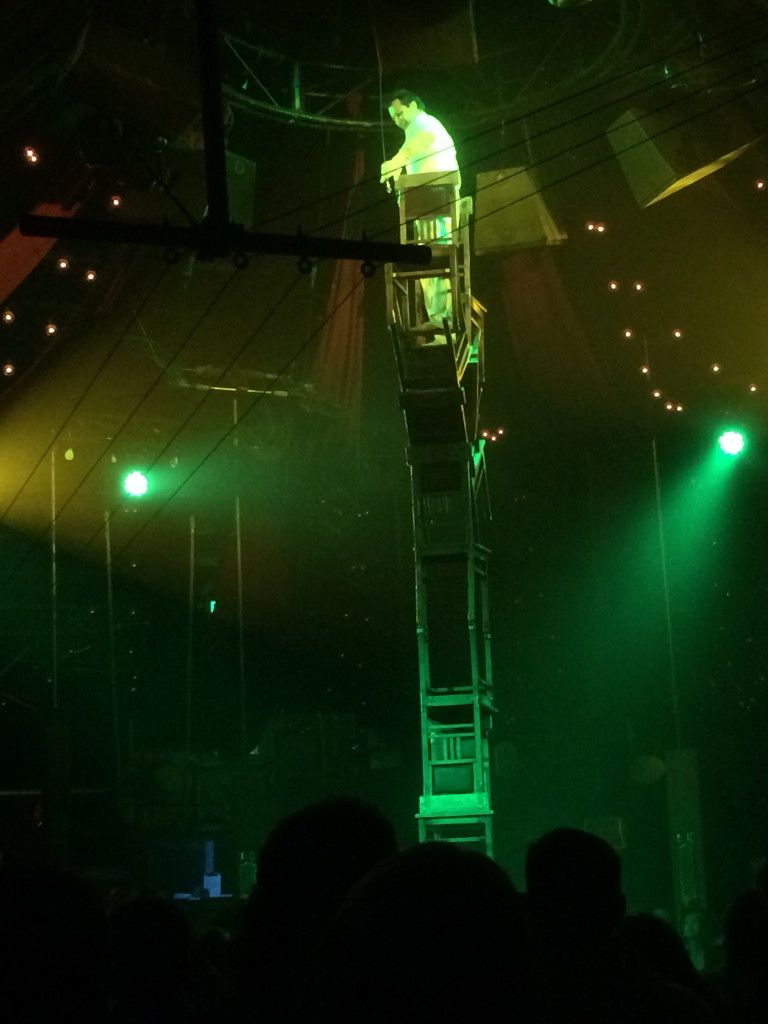 This dude climbed a zillion chairs on top of one another or something.

We decided to call it a night with some additional cocktails at the Chandelier Bar inside the Cosmopolitan. It’s one of our favorite spots in town for the ambiance and quality of cocktails, so long as you’re fine with paying the price. My wife is a huge fan of this place, mostly because she loves chandeliers and this one is pretty serious. It was a great night cap to a great night. 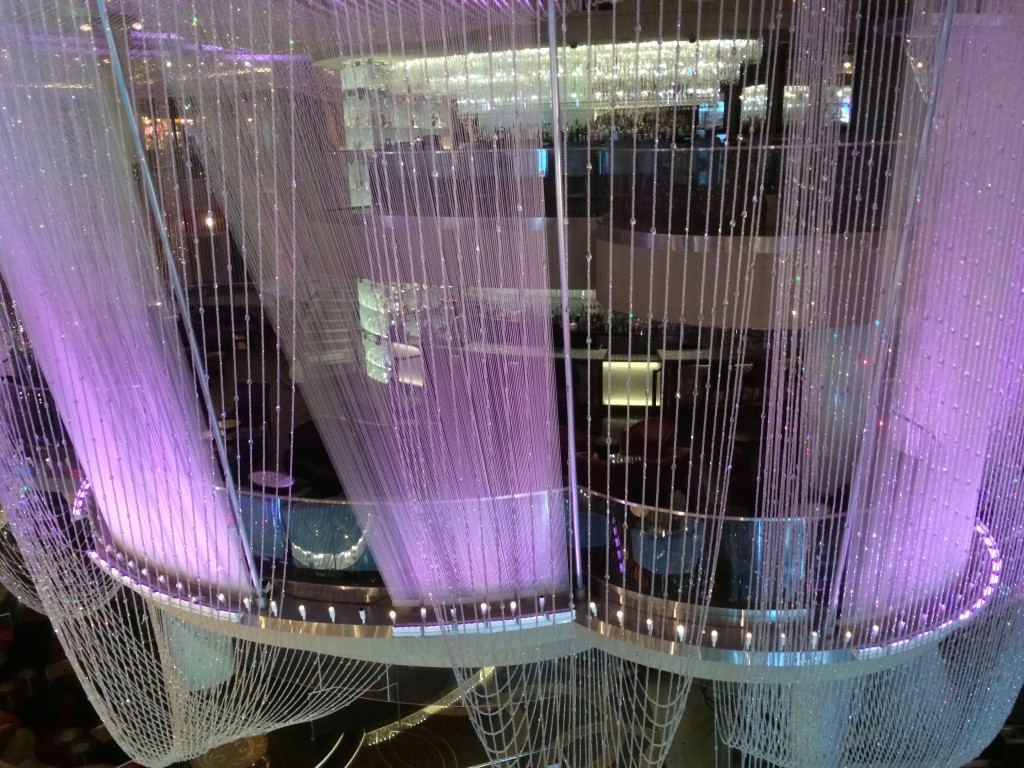 We got up in the morning and decided it was time for a Buffet. We had dinner reservations for 9:00 PM, so we wanted to go eat somewhere that would fill us up enough to last until then. I love Bellagio’s buffet. I love Wynn’s buffet. But the Bacchanal Buffet at Caesars Palace was the one we decided on and it was phenomenal. Huge selection, great quality of items, unlimited mimosas, and good service. The price was a little crazy — $45/person for Sunday brunch — but I didn’t feel like it was a gouging. The quality was awesome, and I definitely recommend it.

We then walked across the street to check out the new Linq project. It was pretty quiet over there for an early Sunday afternoon, but everything is very new and shiny. Couple new restaurants, some other little goofy spots, and then the crown jewel — the new O’Sheas. I was a fan of the old O’Sheas, so I was very happy to hear it was going to return. It doesn’t look anything like the old one, but all the table games have returned, inclusive of those beer pong tables. Looks like a solid bar, and I look forward to visiting again when the place is hopping. 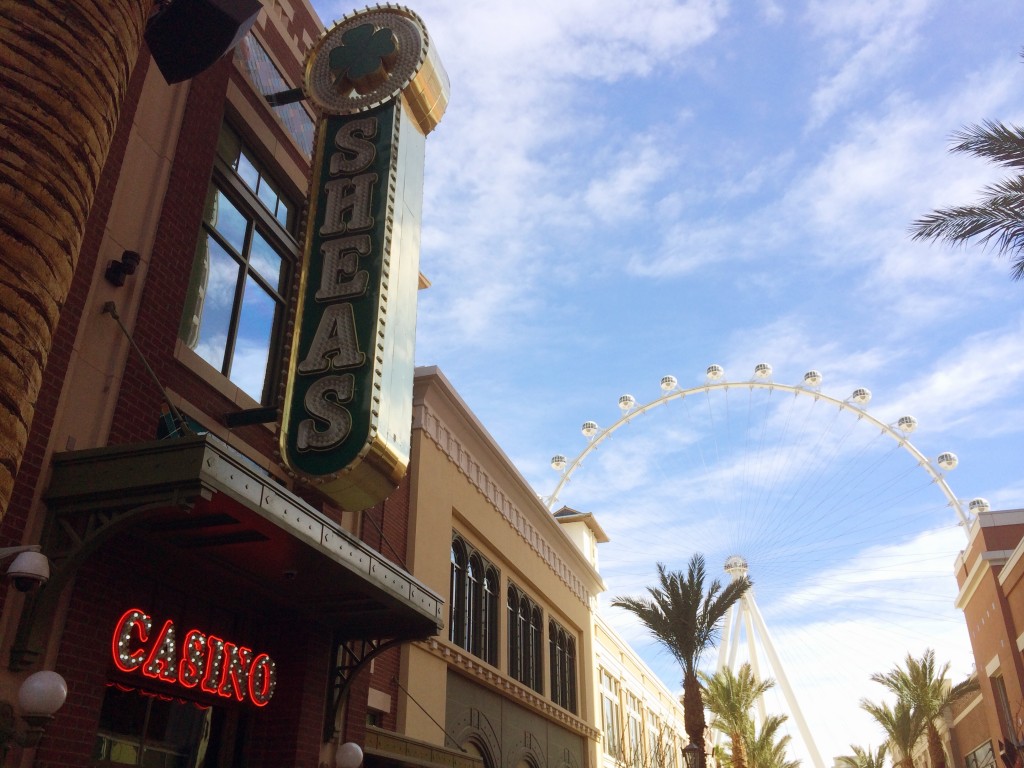 I’m hopeful the rest of the Linq is successful, because there’s some intrigue with the High Roller ferris wheel and Brooklyn Bowl. Until those open (March?), there isn’t much to see at the Linq. We also ventured through The Quad, which still to me just looks like they slapped some new paint, new carpet, and new felt on the tables of the old Imperial Palace. It’s nicer, sure, but it doesn’t really do much for me. Not terribly exciting. Nothing special about it. This is perhaps why people have reported that O’Sheas may expand into some of The Quad’s space. I am hopeful that it does.

We then walked north on the strip, walking in and out of properties, enjoying the 75 degree weather. We ended up at one of my Vegas staples — the Casino Royale — for a few spins on the big Wheel of Fortune machine (we won!) and for some cheap craps (I lost). We then decided to head back to the Cosmopolitan to hit up the Boulevard Pool for a few hours. With a foot of snow on the ground where we left, the idea of hanging by the pool drinking some $19 margaritas sounded pretty nice. It was amazing. 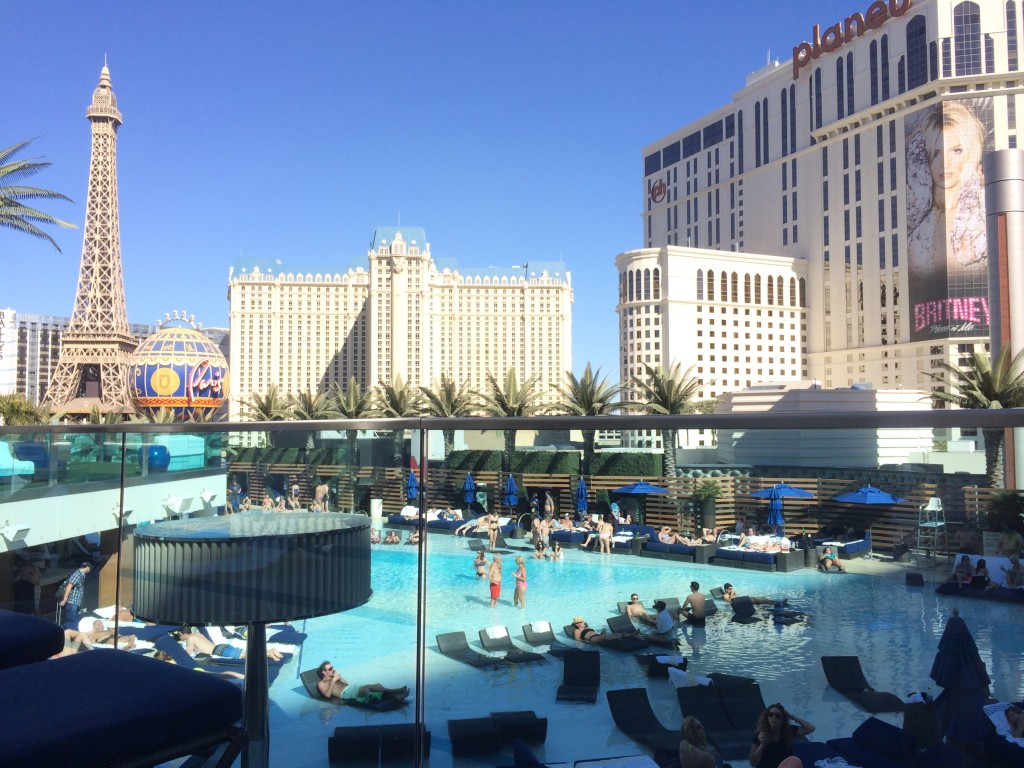 The Boulevard Pool at the Cosmopolitan was open in February. Some pools in town still not open. Glad we chose Cosmo…

Once we were done soaking in the rays, we headed downtown for the night. We had the cab drop us off at the new Downtown Grand because I wanted to check out what they had done with the place. The casino was small, but it was very nice. Good layout, shiny new machines and signage, but very quiet. On a Sunday evening, there were maybe 75 people in the whole casino. We walked around a little bit, played a few machines (lost), and hit up the cashier to add a $1 cheque to my collection. 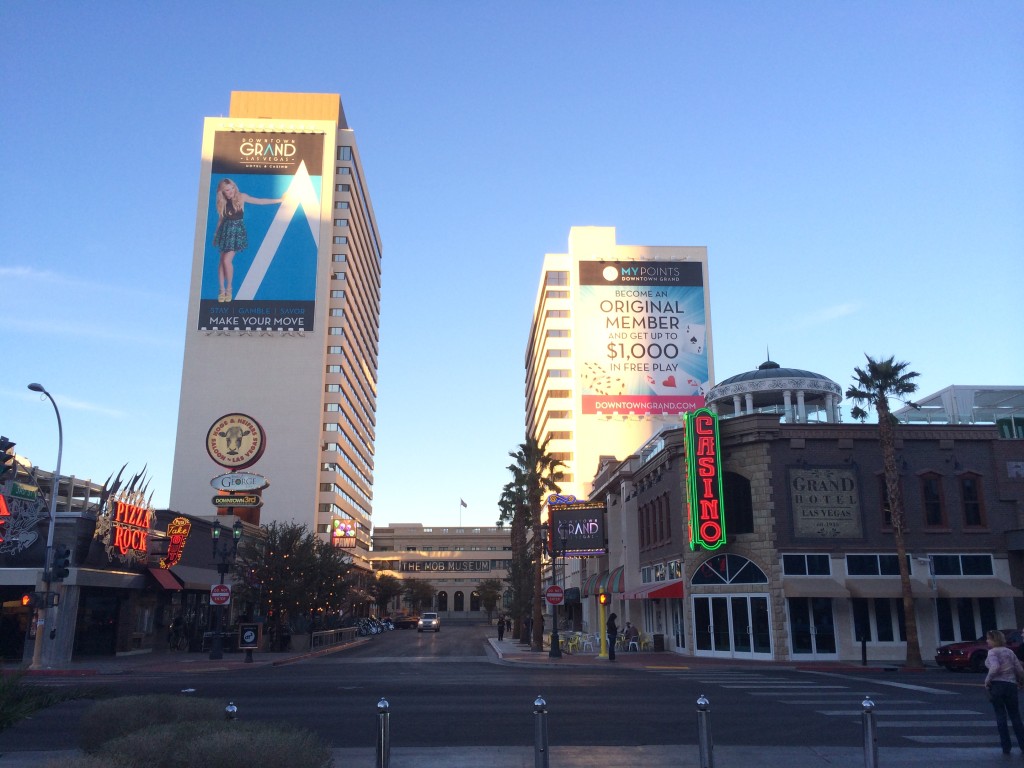 Here’s a look at the Downtown Grand. It’s grand. 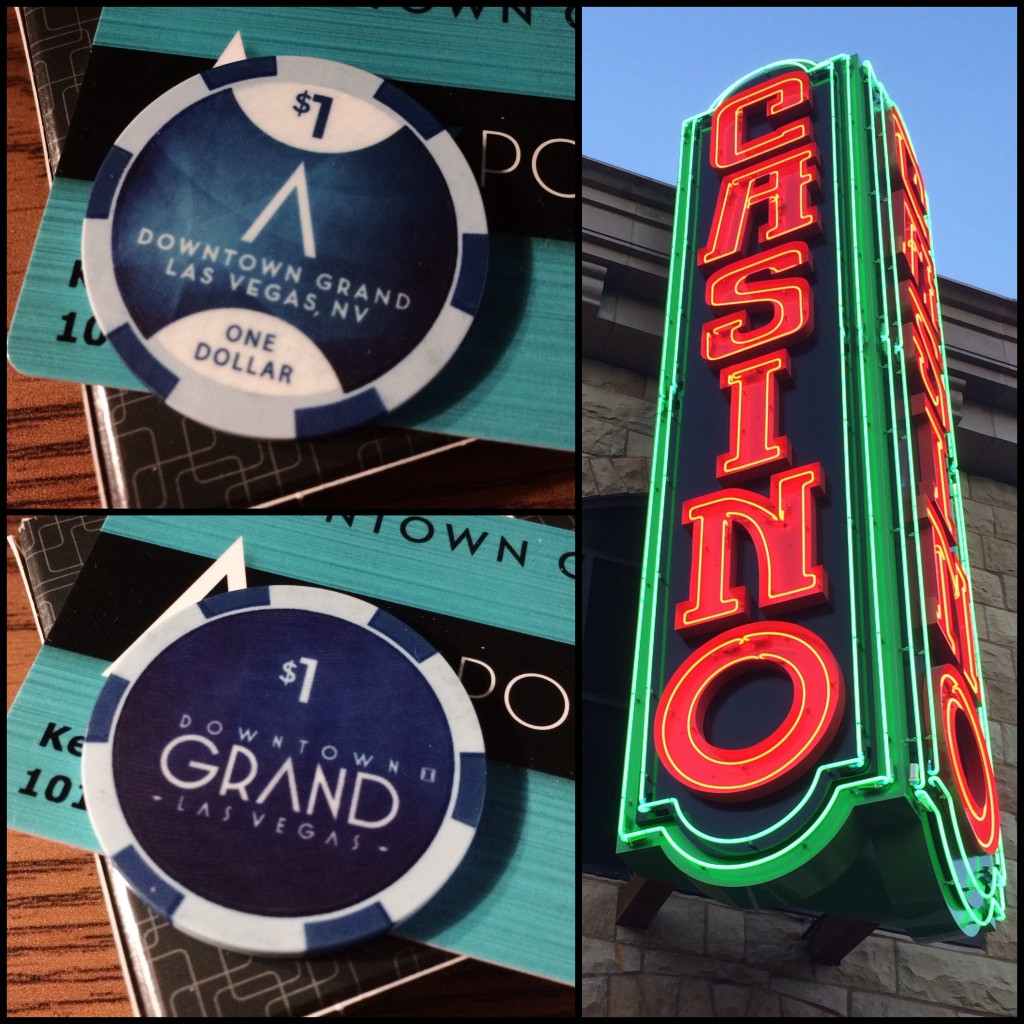 The $1 cheque from Downtown Grand is pretty fancy.

After the Downtown Grand, we decided it had been far too long since we had an alcoholic beverage. Time to check out the new Banger Brewing Company location in Neonopolis. Its door is right on Fremont Street. Hard to miss with a huge brewing drum on the sidewalk outside pointing you in the direction of beer. We decided to do a flight of beers, and were very happy with the IPA (“A Hoppy Ending”) and the Imperial IPA (“Black Eye P A”). The bartender was super cool and very knowledgeable about the beer. We each grabbed a pint to go so that we could have some tasty beer to drink at our next spot. 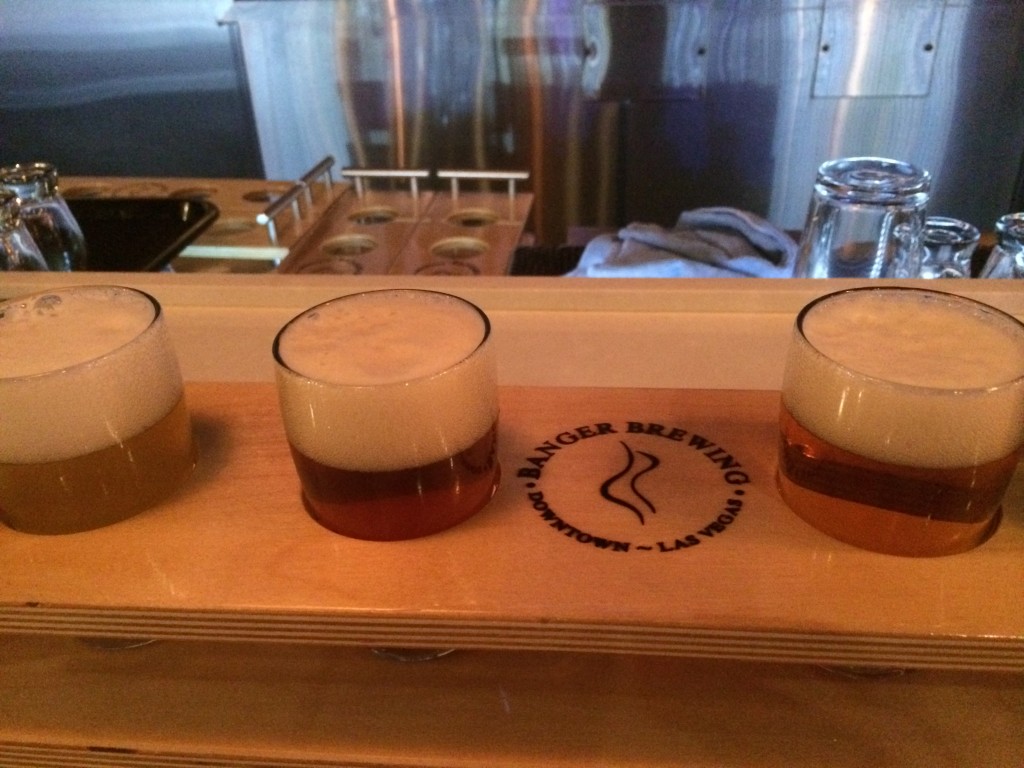 Three of the four beers in the flight. This flight was better than the one from the airport.

No trip downtown is complete without some Sigma Derby at The D Casino. If you’re unfamiliar with the game of Sigma Derby, there’s only a few tables left in the world, and one just so happens to be on the second floor of The D in the Vintage Slots area. The game has room for eight people. You feed quarters into the machine and bet on little plastic horses that race around the track every minute or so. It’s so much fun after you get the hang of it, especially when the table has had a few drinks. Been a part of a loud craps table? Fun, right? Nothing beats a loud Sigma Derby table. Especially when we hit the 200:1 combination with 50 cents on the bet ($100 each…win!). We also played some craps (lost), some Let it Ride (lost), and some Blackjack (won). The D was great, as always. 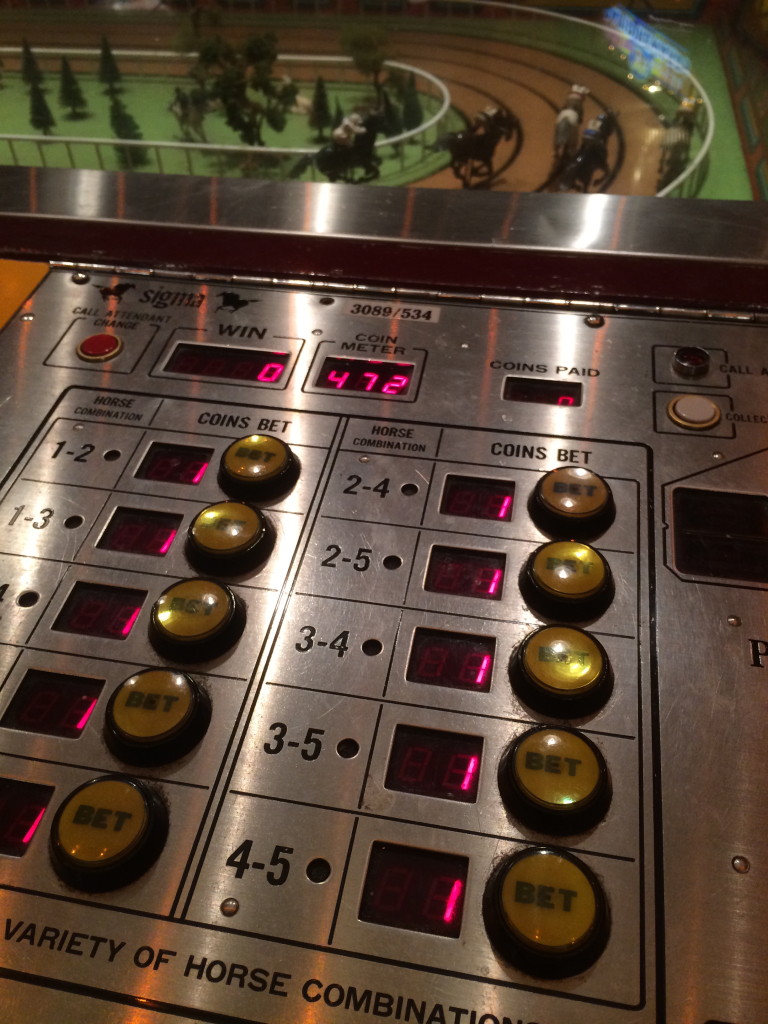 If you bet on every combination, you’re a guaranteed winner. Right?

Our final stop on the night was to our favorite restaurant in the entire world — Hugo’s Cellar at the 4 Queens. We actually booked this trip for the sole reason of enjoying a really good meal at Hugo’s for a joint Valentine’s Day/Anniversary trip. We also brought a bottle of great Cab from our collection just for this meal as well (my poor wife carried it around in her purse all evening — 2010 Cakebread Cab). As always, the service was great, the food was phenomenal, and the ambiance of old Vegas cannot be bested anywhere else in town. As you may know, a waiter will come to your table and make your salad on the spot. While he was putting the salad together in front of us, the waiter said that he used to make this same salad for Tony Spilotro. I was the only one in the area to get the reference, and replied with a “No shit?” He answered in the affirmative and then went on to say something to the effect of “Vegas ain’t what it used to be.” I love that restaurant. 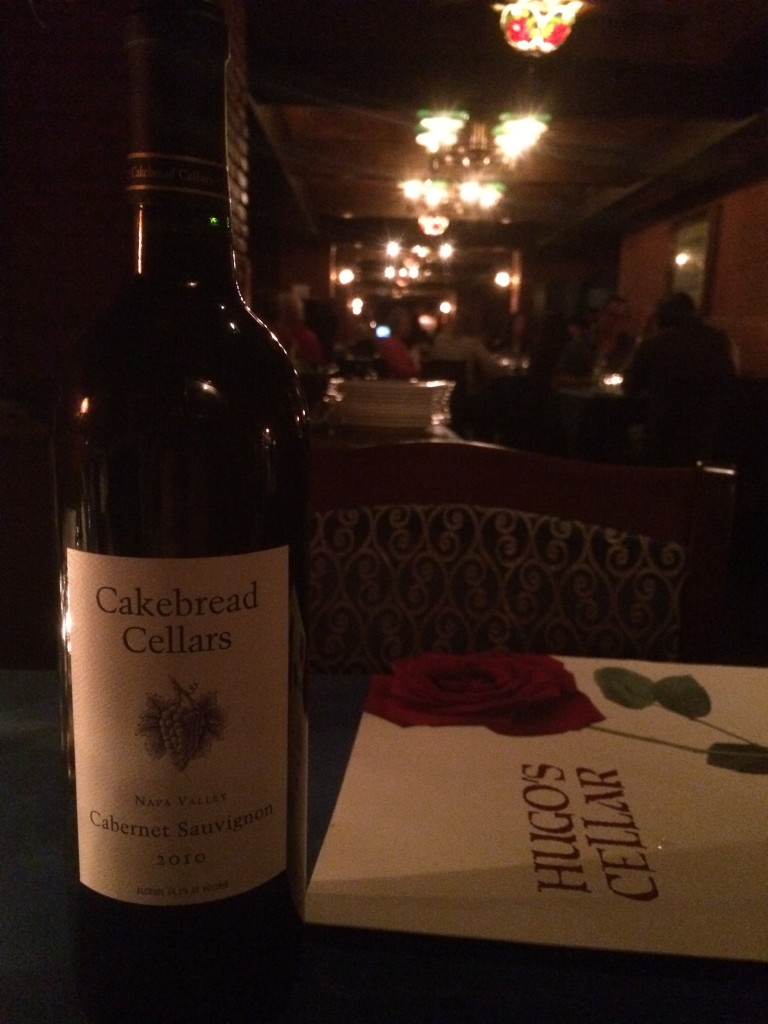 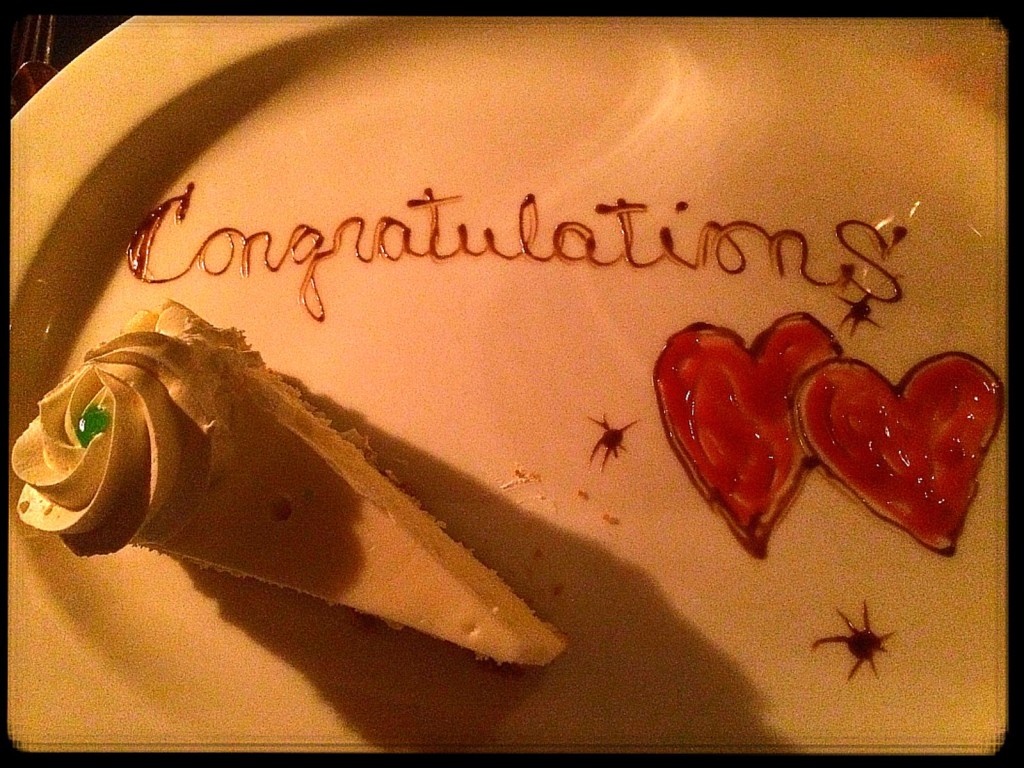 When the staff found out that it was our anniversary dinner, they presented us with this.

We walked around downtown for a while longer after dinner, enjoying the people watching and neon lights. It was then time to head back to the Strip to get packed up. My wife had an early spa appointment at the Cosmo and I had an early appointment with a Craps table (lost). We met for lunch at Holstein’s in the Cosmopolitan, and were very happy with our meals and drinks (me beer, her shake). It was then time to head to the airport, where I had to make one final wager before boarding the plane — a terrible pay table bet on a deuces wild machine. Nice way to end the trip, though. 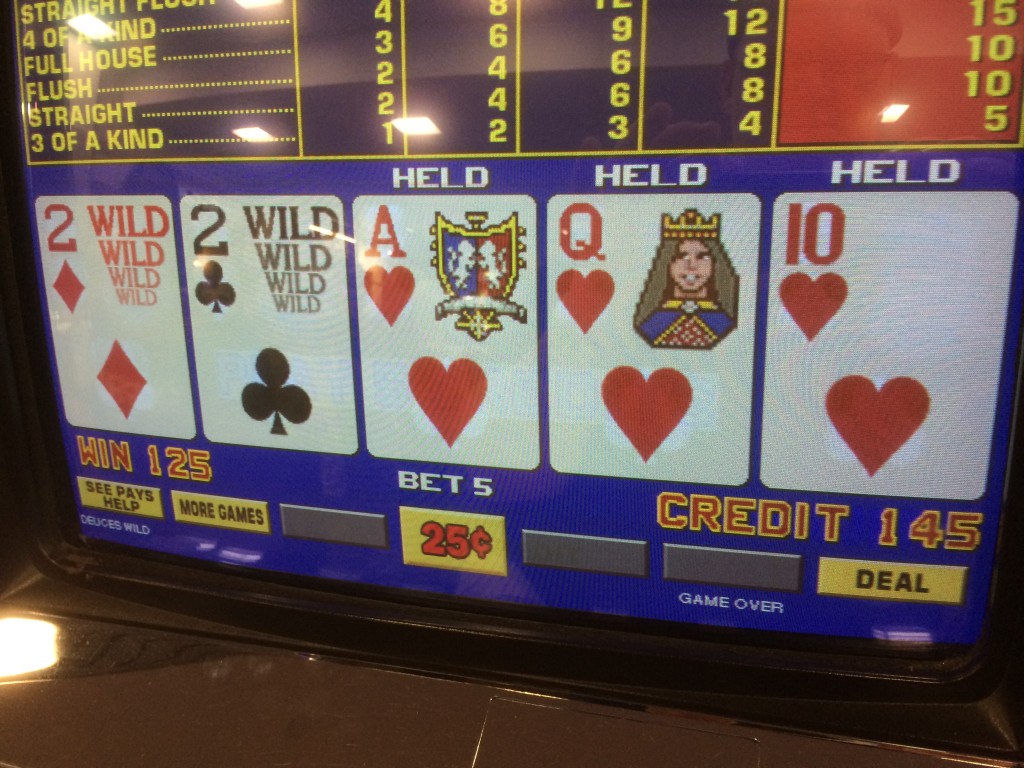