As a Vegas junkie, I always enjoy reading and hearing about trip recaps. They are great for keeping up with what is new in Vegas, and it helps to tide me over until the next time I’m able to get out there. It is also a great way to make the reader a healthy bit of jealous, so I offer my apologies in advance. I just returned from a 4-night trip to the Valley, and this is my story. 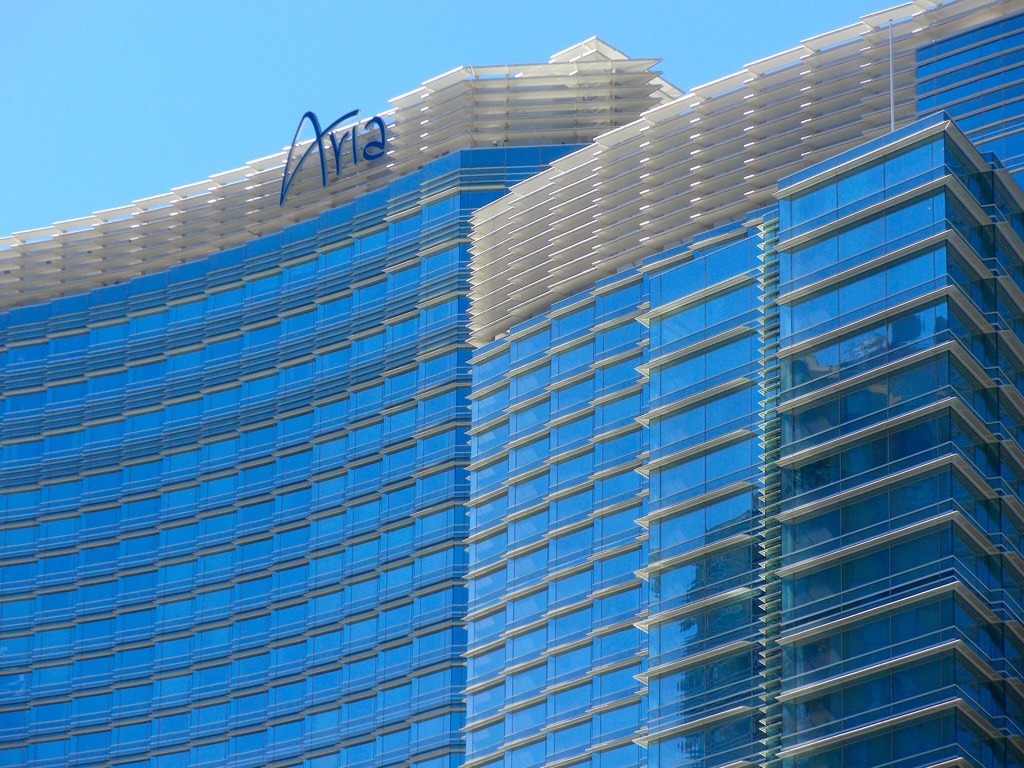 This was one of those hey-let’s-get-the-eff-out-of-town on a whim kind of trips. We found a great deal at the Aria, some decent flights, and we were off. I had not stayed at the Aria before, but had been there several times. I was happy to cross a new hotel off my Vegas Hotel Bucket List, too. The hotel itself met every expectation I had coming in. That doesn’t always happen.

Check in was a breeze, though the $20 trick yielded no upgrade. I had heard that the Aria was a bit stingy with their upgrades, but over Thanksgiving, I figured I had a decent shot. Side Note: Thanksgiving is an interesting time to visit Vegas. Not really busy at all except in the buffet line.

The Aria (and most other casinos) had started putting up their Christmas decorations, which was kind of cool and also weird to see in Vegas. I’ve never been there over the holidays, but suspect Christmas could be a fun time to be there. The decorations were awesome. Aria had these little ornament ball thingies hanging from the ceiling. Here’s some more fancy decor found in and around the Aria: 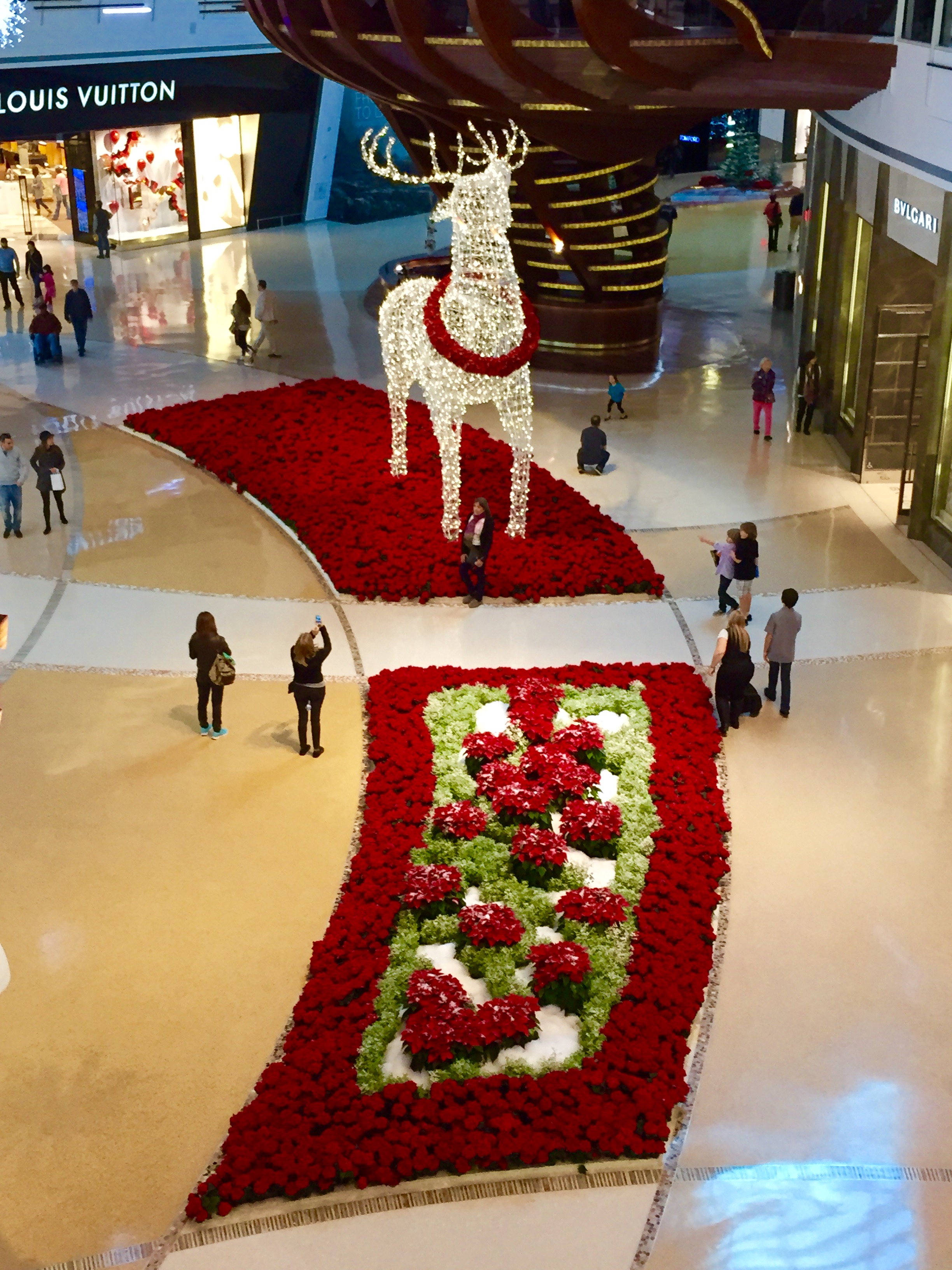 And now for some Christmas trees. 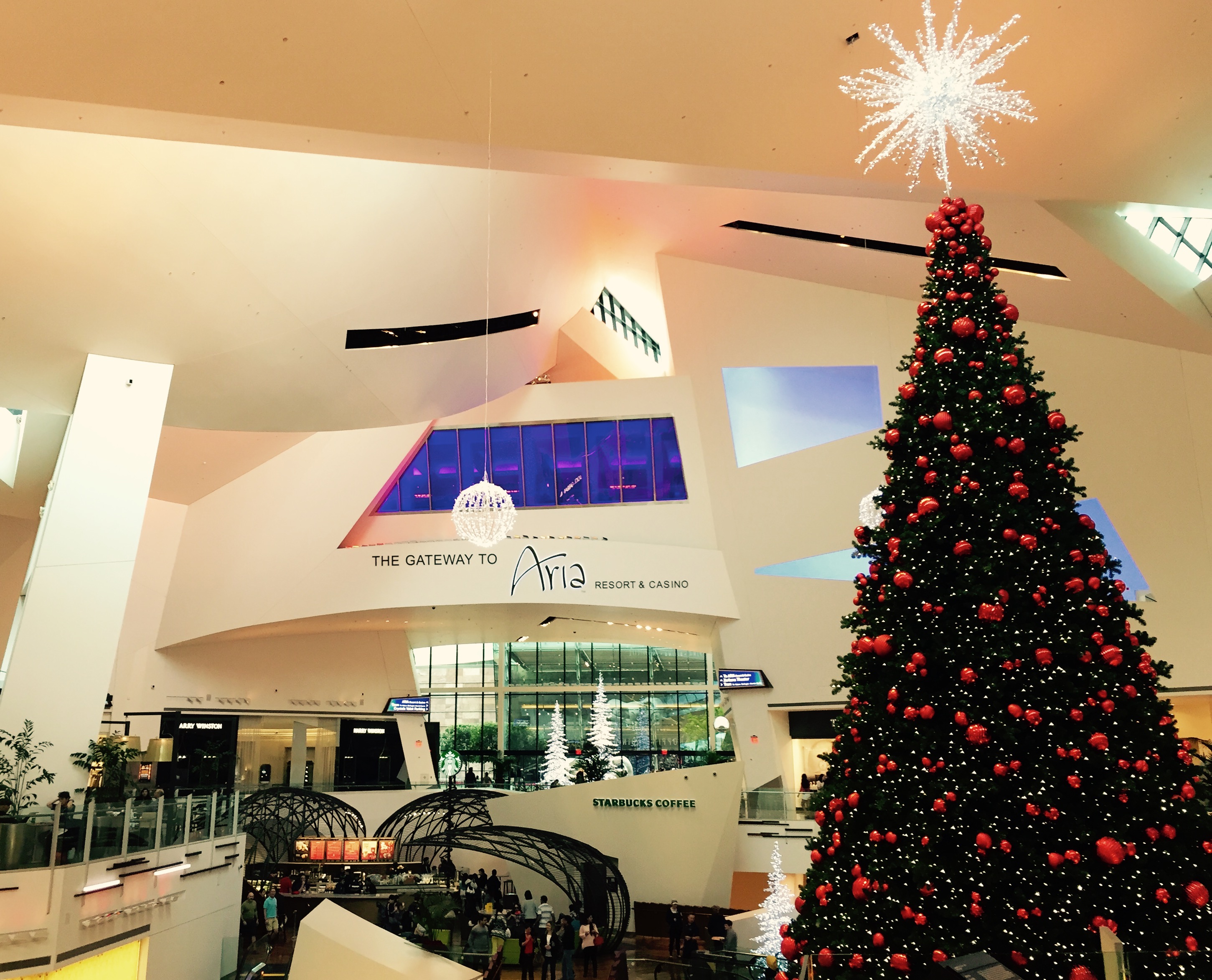 That tree was the biggest we saw. This next one was prettier though.

We visited Jean Philippe every morning for coffee and to visit our pal, Mr. Grinch — which could also describe most of the employees there. One of the only bad service issues we had all trip. Nevertheless, the coffee was good and the chocolate Grinch was pretty awesome.

Enough with the holiday decor. Let’s get to the room. It was roomy for a standard room, with tons of bells and whistles. Drapes, lighting, television, etc. were all controlled by a little touch pad thing. It was pretty useful, though I imagine some people just wish they could pull the lamp cord to turn the dang light on and off. The bathroom was stellar with an awesome shower I wanted to take home with me. 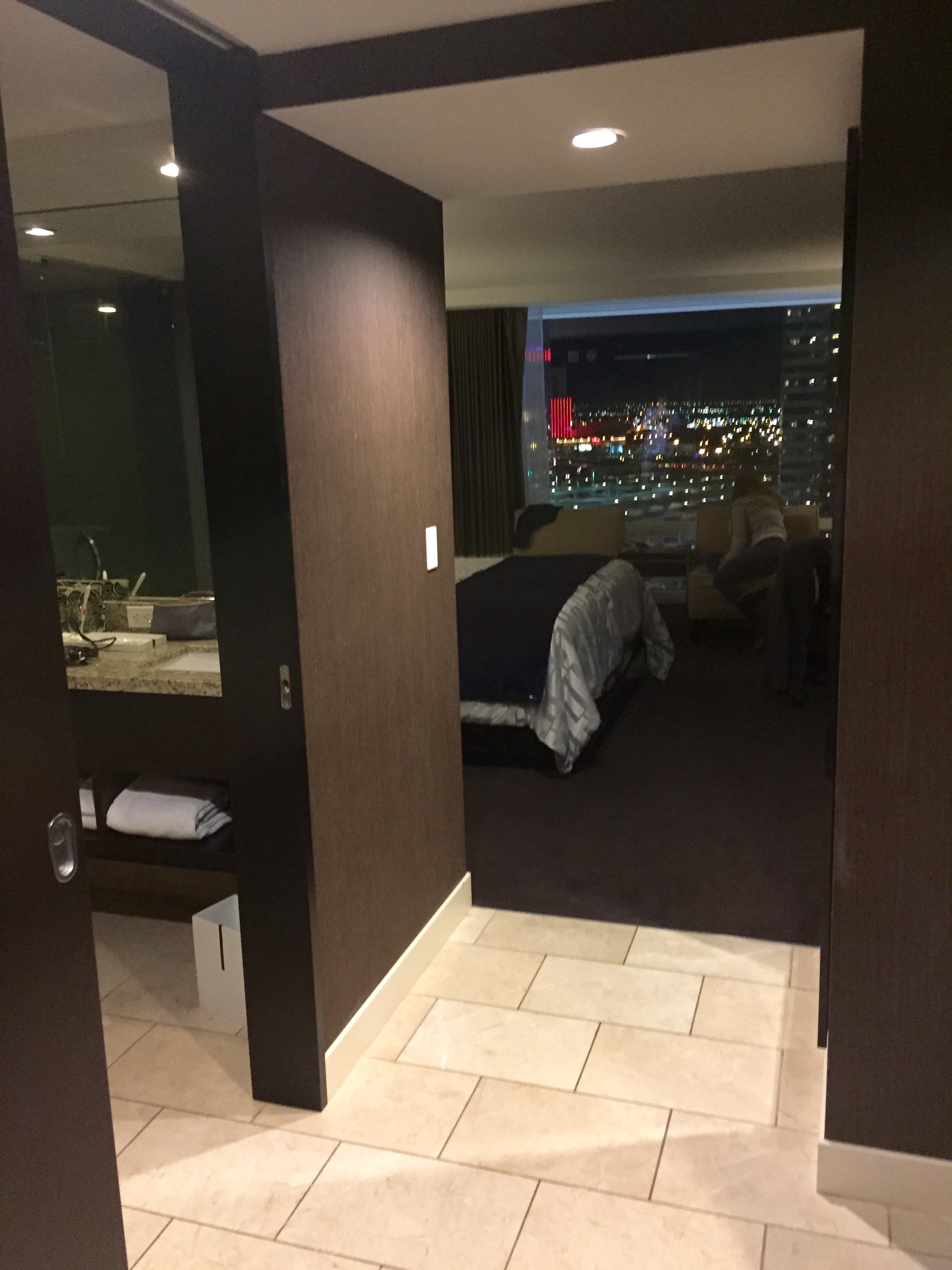 The first night we had dinner at Lemongrass, which was absolutely delicious. It is also open late, which was good because it was late. Our options were this, the Aria Cafe or room service. We made the right choice. Definitely recommend the pot stickers. We sat at the bar, so we didn’t get the whole restaurant feel, but we enjoyed ourselves. Food was reasonably priced for being next door to the Baccarat pit. Was expecting more expensive. 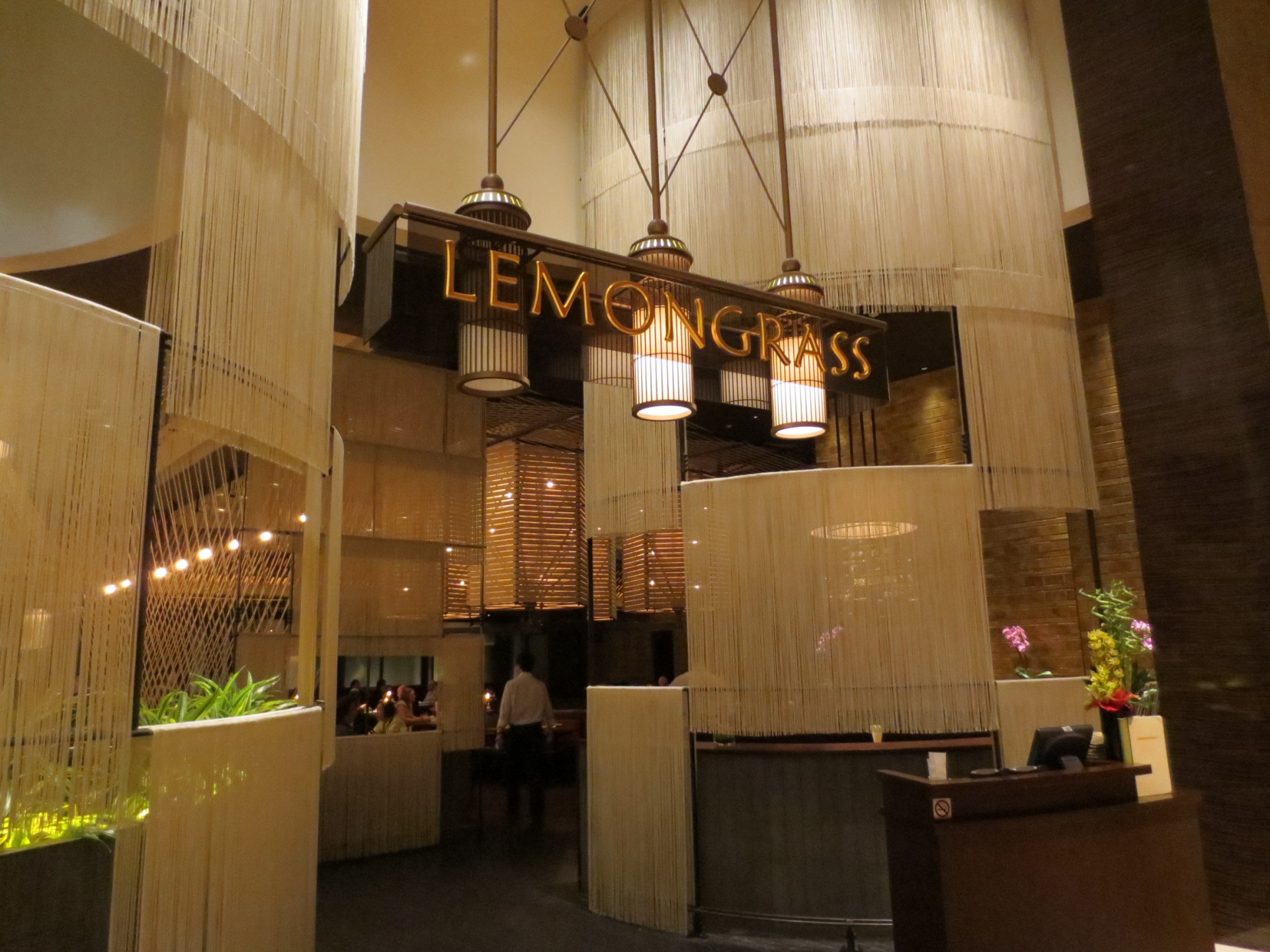 We explored the Aria the rest of the night. After my wife went to bed, I returned to the casino floor to hit up my favorite poker room in town. Not just because of the fancy cards on the front of the room (pictured below — fun fact: there are exactly 52 cards in this thing), but because the room is just done right. Great drink service, good chairs, and some of the best action in town on 1-3 NL and 2-5 NL Hold’em.

The next morning, we got up early to go to the Sports Book to make a few wagers. We’re big college basketball fans since we are University of Kansas alumni, so we had to go watch (and wager on) the KU basketball game. The Sports Book is small but nice (kinda like this bet I made on KU that paid off). 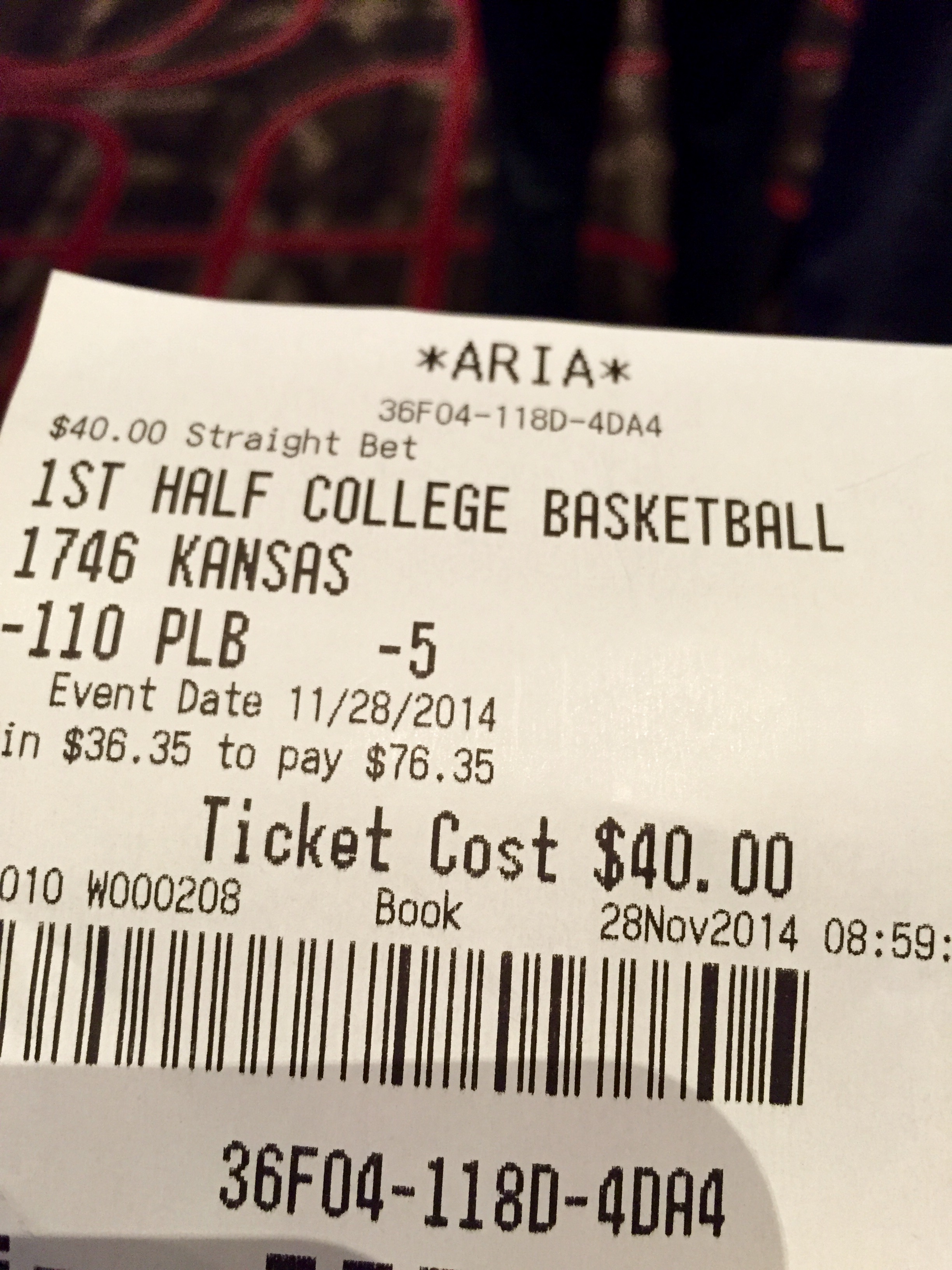 We had pizza at Five 50, which was perfect for a little hangover cure. The crust is really tasty. Then we were off to do a little exploring on the Strip. First place we hit was Bellagio to see what was going on in the Conservatory.

It was a little cloudy outside, but warm. The resulting pictures were kind of cool with the clouds, though. Would you look at ‘them fountains dance!

Then it was off to check out the Cromwell, since I hadn’t been there since it opened. It’s got a pretty good facelift on the old Barb Coast, err, Bill’s. In all seriousness, it was well done inside. Nice carpet, good vibe, clean and inviting. I did immediately long for the old lounge behind the bar though. It’s still there, but it’s all fancy now. Just didn’t feel right. We didn’t linger, but I would like to linger the next time I’m in town.

Then we walked down to the Linq to see some of the new happenings. We had been through when most of the shops were opened, but there were several new ones. We also wanted to check out some of the new things at the new Linq Hotel (or whatever the hell they’re calling it now — seems to change every week). I have tip my hat to Caesars Entertainment, though. I didn’t think the Linq would be that interesting or cool. But they did a great job on that area. Clean, nice sidewalks with great attractions and shops. Oh, and the big ass ferris wheel.

We eventually made it back to the Aria and needed a snack. We stopped at Javier’s because we really like rope chandeliers. But seriously, this place was great. Awesome tequila cocktails and a great snack. Somehow we spent $90 on a couple drinks and some dips, but whatever. Vacation, right? 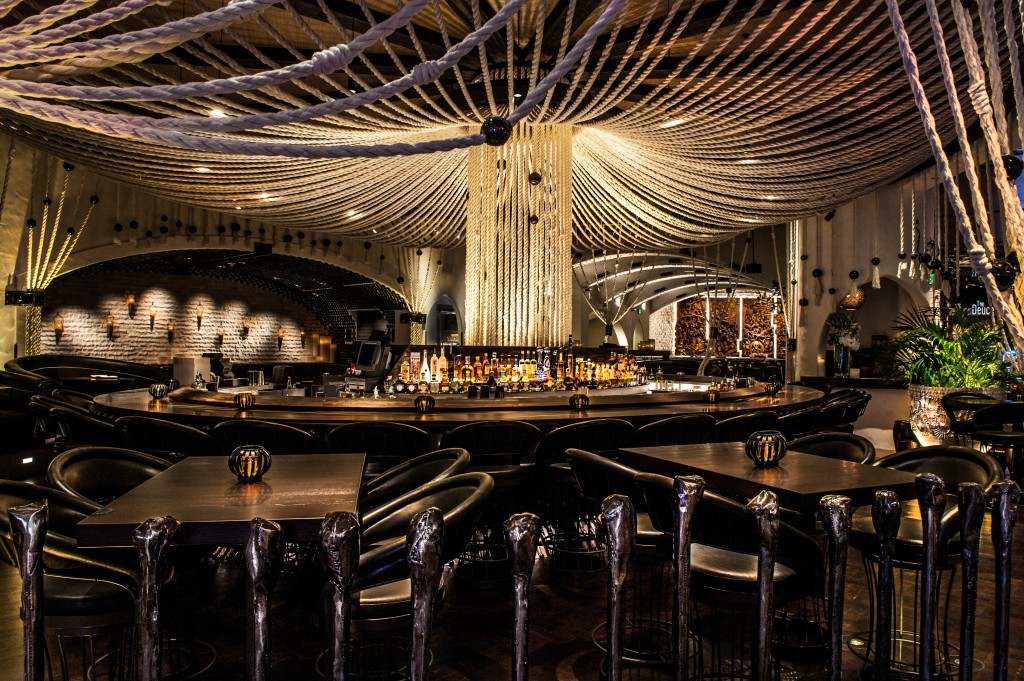 We freshened up and headed back down to the casino floor. We played some casino games and then headed to our dinner destination — Julian Serrano. Tapas felt right because we didn’t want to eat a huge meal because we had plans for a dessert destination later that night. The tapas were good, though this was probably my least favorite meal of the trip. 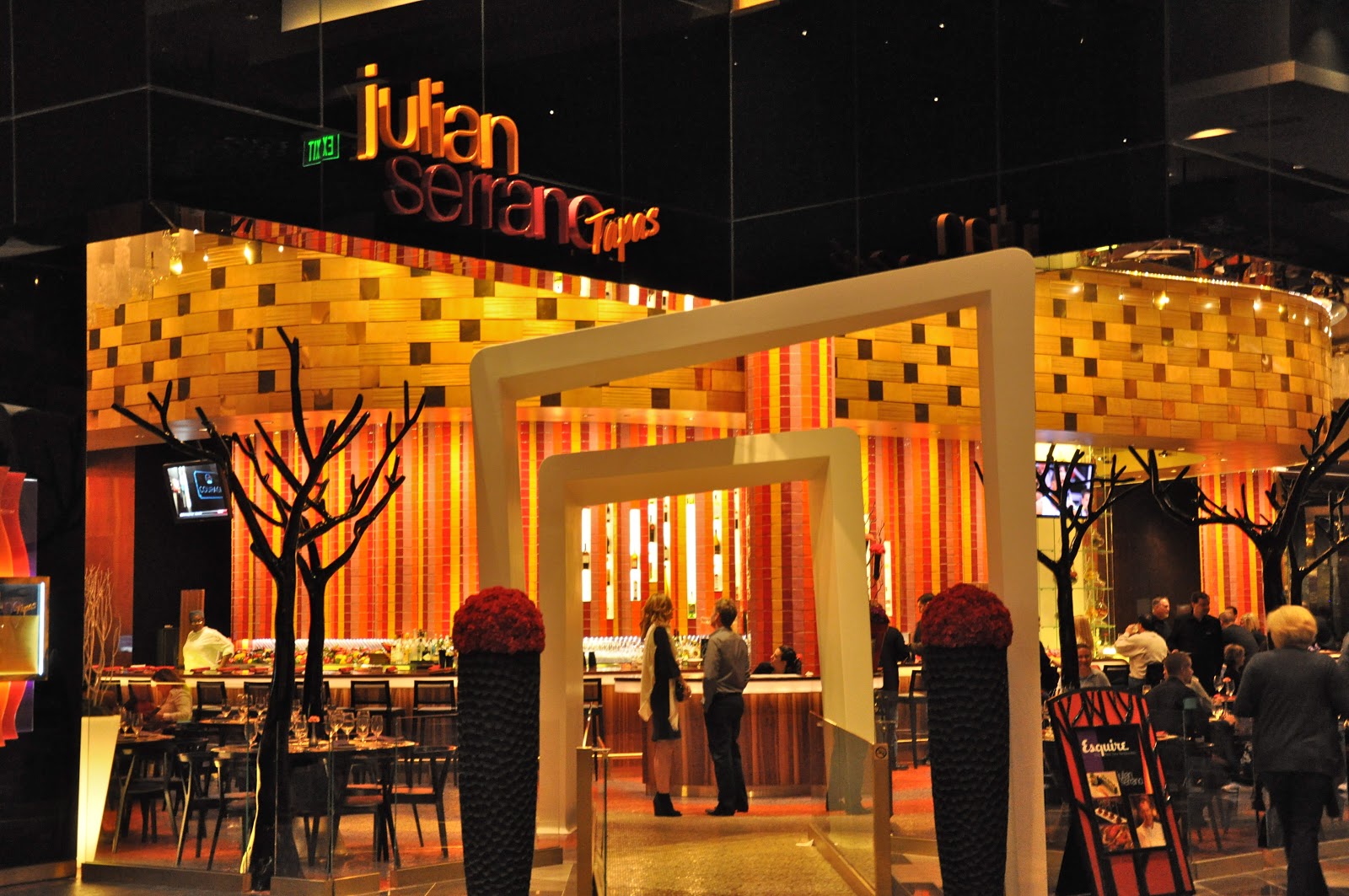 Our next destination was Jean Georges Steakhouse, where we planned to do some wine and dessert. This of course turned into two appetizers, four glasses of wine, two cocktails, and a dessert. The bacon-wrapped shrimp was literally the best thing I have eaten since I can remember. We sat at the bar, and the bartender was awesome. He found out we were from Kansas City so he wanted to talk about the time George Brett came and sat in the bar. Good stories. Great food and wine. 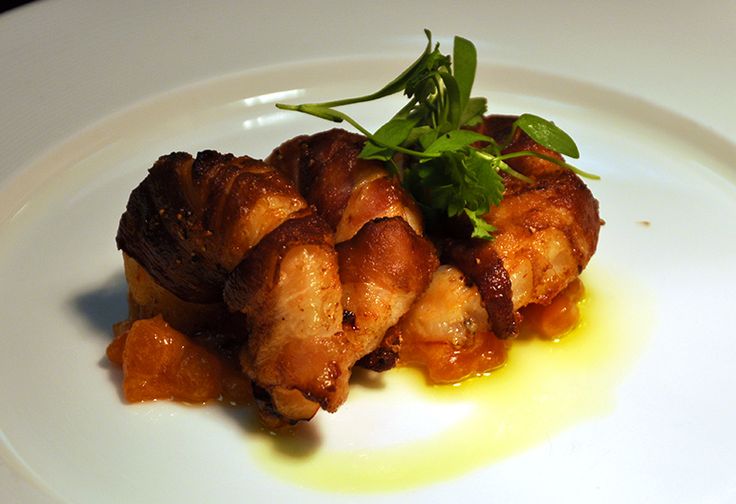 After several beverages, the night caught up with us and we retired for the night. On the way upstairs I caught a second wind and decided to hit the poker table one more time before coming to bed. It was a profitable trip for $1-$3 NL Hold’em. 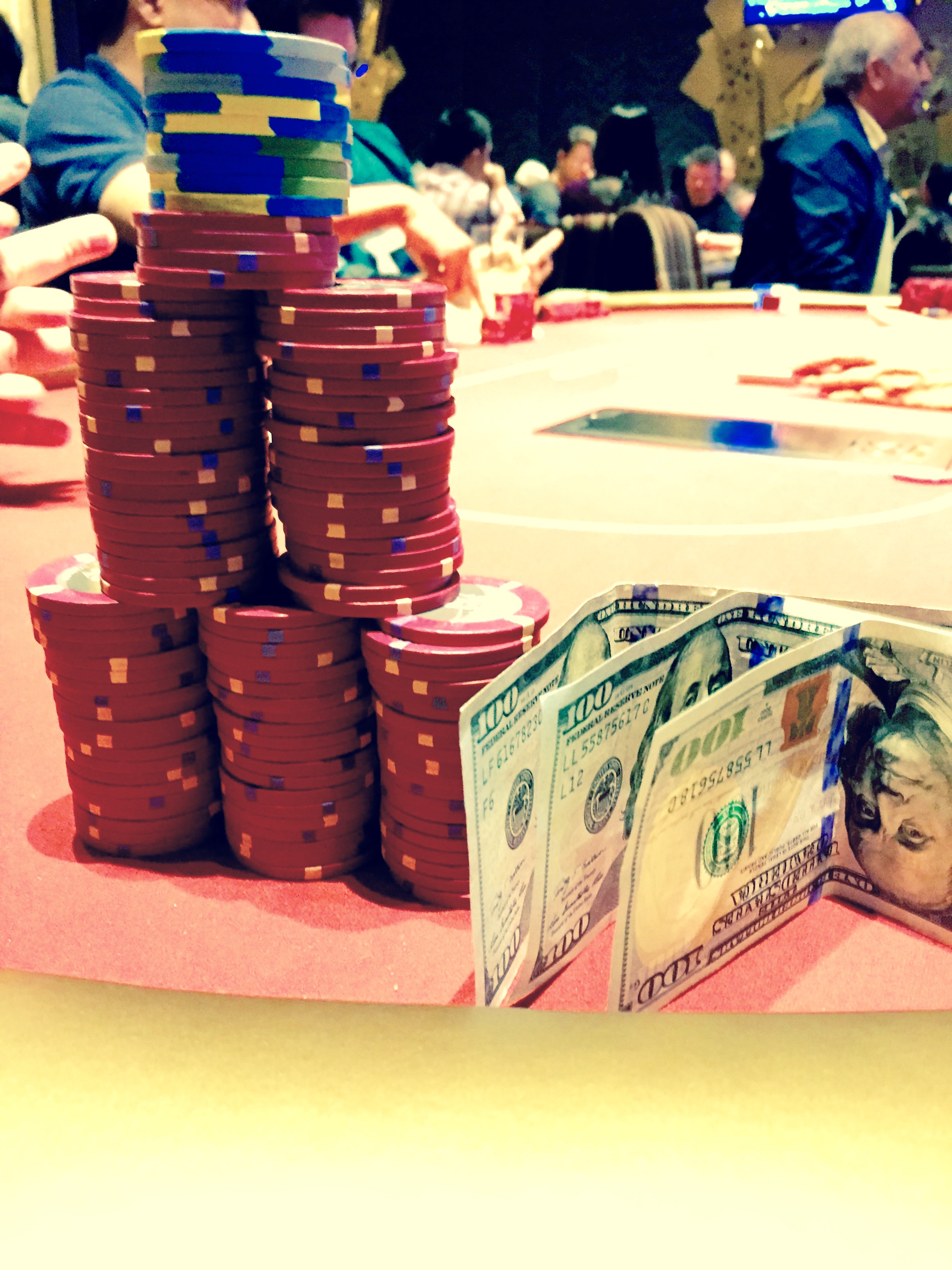 The next morning, we had our own Thanksgiving feast, even though it was the day after Thanksgiving. What better place to pig out than the Aria Buffet? We decided it is our 3rd favorite buffet in town behind Caesars and Bellagio. Tied with Wynn. Anyway, it was decent. 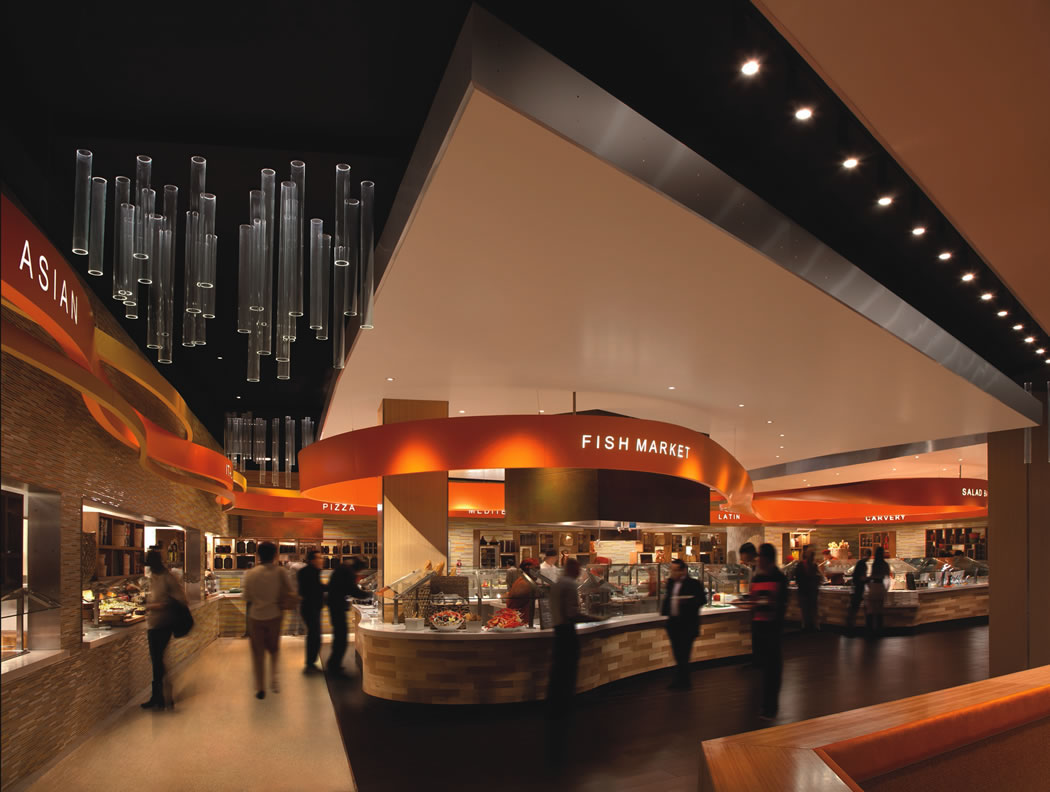 That afternoon, we walked the opposite direction down the strip, heading south. We ducked in and out of Monte Carlo, NYNY, Excalibur, Luxor, Mandalay Bay, Tropicana, and MGM. My phone said we walked 10+ miles that day. The most interesting part of that excursion was checking out all the new stuff in front of the Monte Carlo and NYNY. MGM did an outstanding job incorporating new shops with the existing buildings. 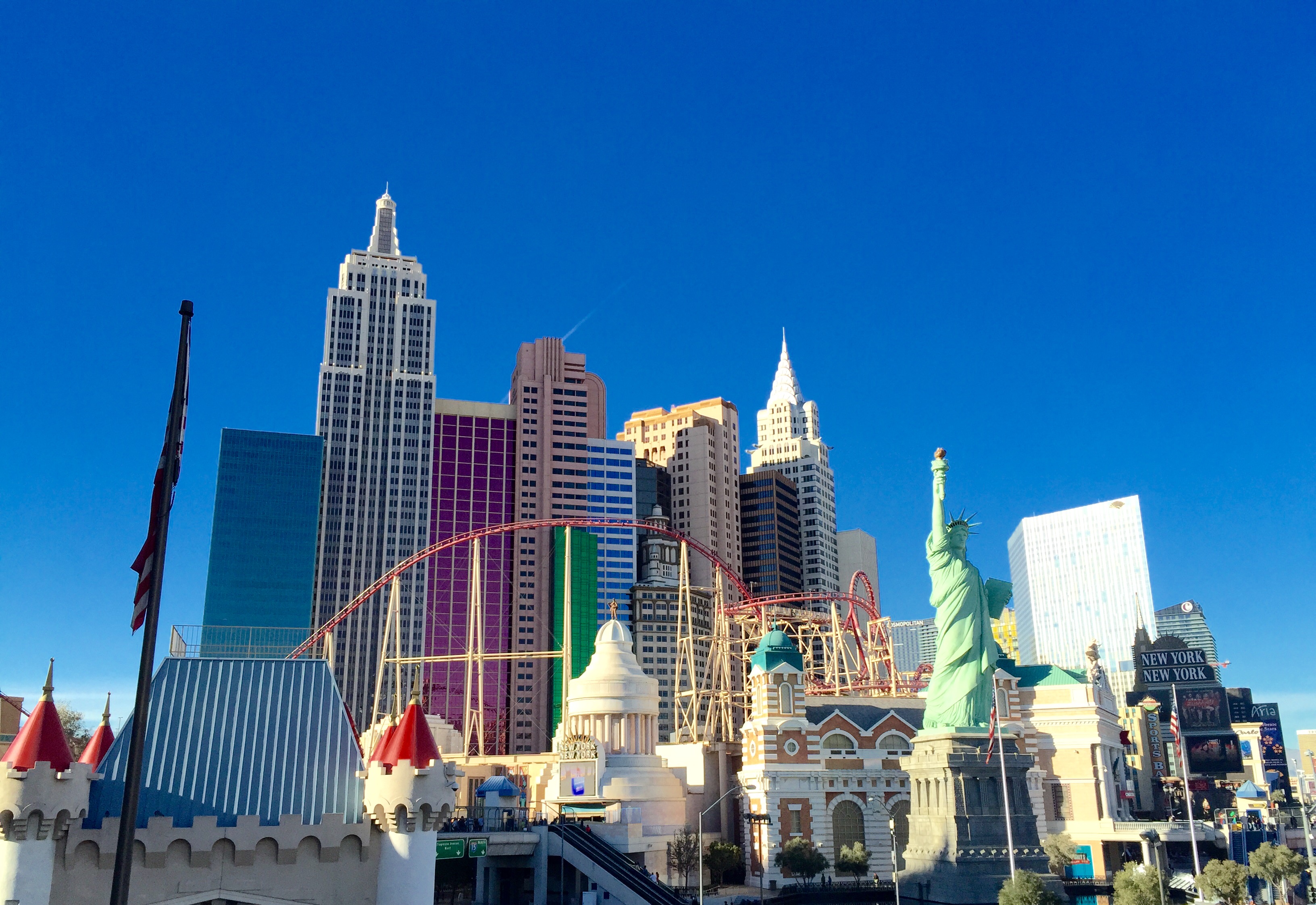 We freshened up from our Strip walk and headed down to Fremont Street. First Stop: Downtown Cocktail Room. My wife had never been there, and I wanted to show her a little different side of Vegas. 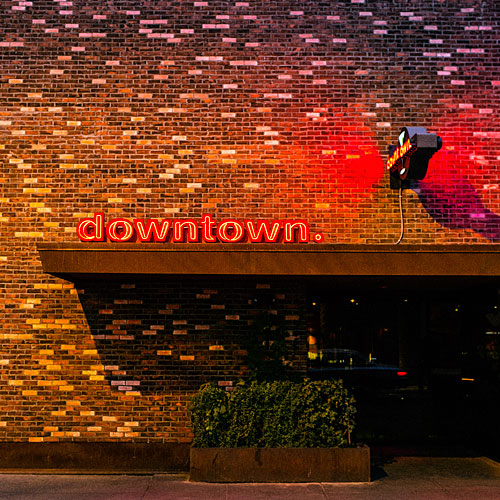 Then it was on to The D for one of our favorite pastimes — Sigma Derby. We played for at least an hour and a half. It felt like we lost our asses — and we dropped like $40. Best game in Vegas. Tons of fun. 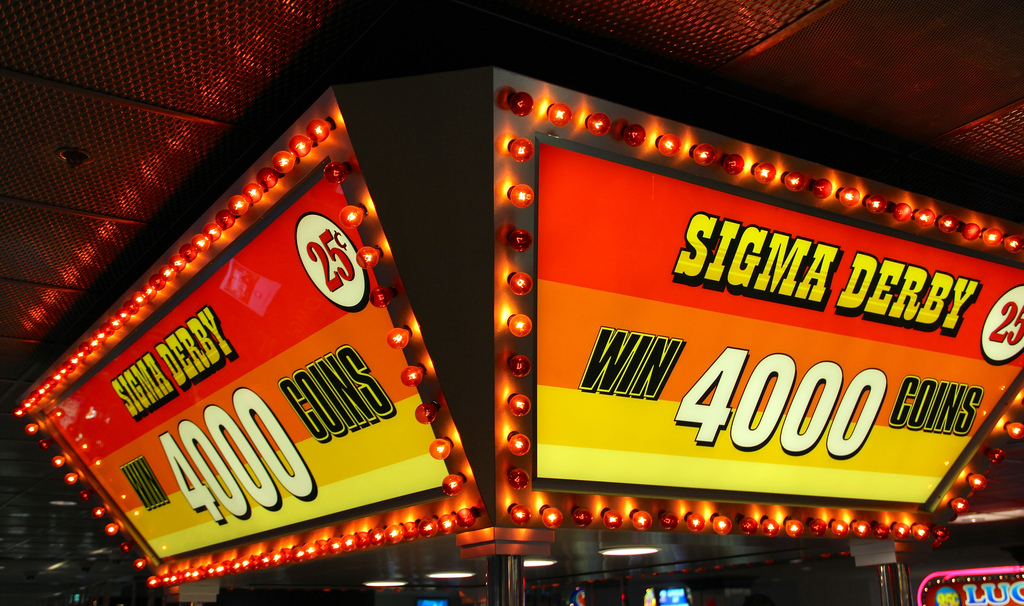 Then it was off to one of our favorite restaurants in the whole wide world — Hugo’s Cellar in the basement of the 4 Queens. Best “old Vegas” restaurant in town. Delicious food, amazing service, and a great value for what you get. The same meal on the Strip would cost $600.00. We reserved our favorite booth (the one we had on our honeymoon and on every trip since) and they came through as expected. 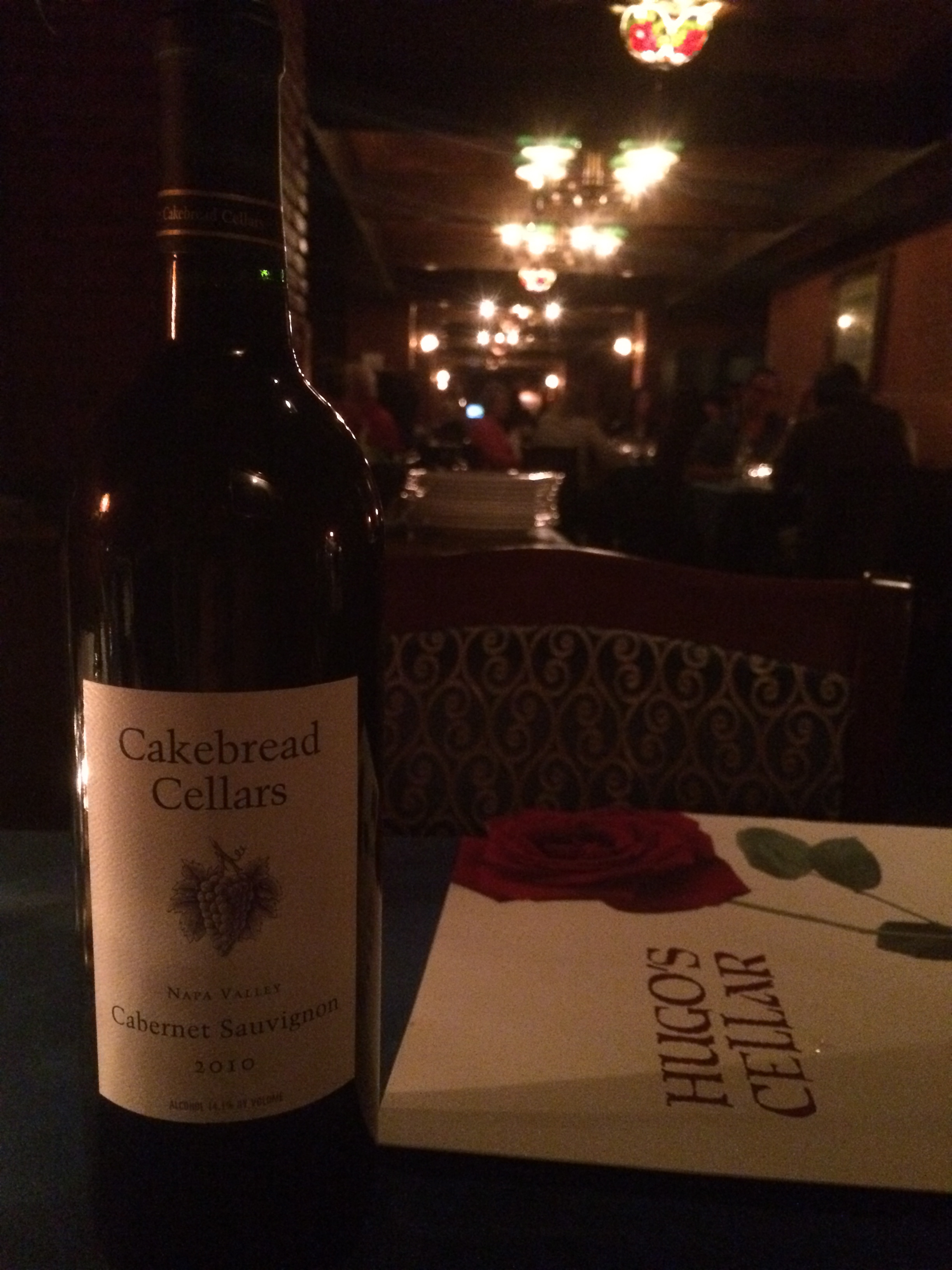 After dinner, it was back to the Aria for some late night video poker. I honestly can’t recall if we won or lost. Probably a little of both. Who knows. We crashed at some point, too. Things are hazy.

I do know that the next morning we got up and headed to the airport. That part I recall. As for the trip itself, it was a great time. Somewhat weird over Thanksgiving, but I’d definitely do it again. And I’d definitely stay at the Aria again. The service was outstanding and the rooms were very nice.