Have you ever walked by a Sports Book in a Las Vegas casino and wondered what all those huge displays with words and numbers mean? You know, the ones that kinda look like Lite Brite screens. Surrounding them are massive television screens displaying sports action and a bunch of dudes yelling at those screens. Anyway, if you have wondered what all those screens mean and how you, too, can become one of those dudes yelling, you've come to the right place.

In this post, we are going to talk about what all those words and numbers mean up on the Sports Book wall. We're also going to discuss the various bets available to the player, the house edge, and some basic tips on strategy. As always, we'll approach this subject as if you've never walked up to a window and placed a bet before. The goal is that once you have read this, you should have no problem wading into the Sports Book, reading available wagers, and placing your bets.

Let's start with the easiest bet in the sports book. It's the money line. This is the easiest because it's the one most people can understand -- simply, who is going to win the game? If Kansas is playing North Carolina in the Final Four, and you think Kansas is going to win, you might bet the money line. But what if odds makers believe Kansas is the better team? In that case, you will not get paid equal money for your winning wager. Let's put this into a real example. Look to the right. Let's look at the Vikings/Rams line. It reads:

Those numbers to the far right represent the Money Lines. In this example the Vikings are heavy favorites. The "-600" number means that for every $600 you spend, you'll make $100. Similarly, since the Rams are heavy underdogs, if you bet $100 on the Rams, you'll win $400. All money lines are based on the premise that you're wagering $100.  It's the easiest way to express the numbers. 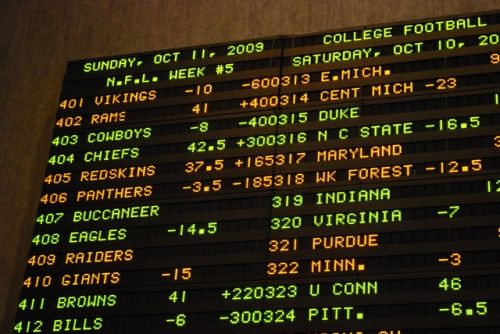 What about the "line" or the "spread" bet? It's the one you often see in the newspapers in the morning. This number represents the handicap one team will have against the other to make it an even game. Similar to golf or bowling, you have a handicap so you can compete with other people at various skill levels. The same goes for sports betting -- every game has a line that represents the breaking point between the two teams. If the teams played each other 100 times, 50 would go one way and 50 the other. At least that's the idea.

Let's look at our example above again. The "-10" number next to the Vikings is the spread on the game. This number means that the Vikings are favored by 10 points in the game. Conversely, the Rams are a 10 point underdog (+10).

The "Total" or "Over/Under" is another very popular bet in the sports book. It simply requires you to add all the points scored by both teams together to form the "total" for that game. Oddsmakers will set the total line and you will bet either the "Over" or "Under" on that line.

Let's look at our example again. As we mentioned in the "Spread" discussion, the Vikings are -10. As a result, there's no need to write Rams +10 because we already know that if one team is -10, the other is +10. That leaves room for the Total or Over/Under number, which is 41 (listed next to the Rams). There is no significance of it being listed next to the Rams, so don't worry about that. It's for the whole game.

First, some tips for betting etiquette are in order. When you walk into the sports book, look around for the paper sheets. They'll normally be by the betting windows and they are print outs of all the day's wagers as well as several future wagers (e.g., Super Bowl 2016 odds, Masters Golf Tournament, etc.). On those daily wager sheets, you'll find the same wagers as you see on the boards above, except the numbers on the board above may be slightly different due to the line moving one way or the other.

Once you find those sheets, use them to take some notes and prepare your bets. Look at the example above once again. The top line reads "401 Vikings -10 -600" and we already know what all the numbers mean except the 401. That's the number the casino puts on the Vikings for that day. Similarly, the Rams are 402. Especially if you're placing multiple wagers at once, write down all these numbers before you approach the counter so you aren't having to look up at the boards and search for the numbers.

Alright, let's make some wagers. Using our same example above, let's say we want to bet on the Rams +10, the Rams Money Line, and the Over, each for $100. When we approach the window, we'll say the following:

The teller will ask for $300 and will print off three tickets. REVIEW THE TICKETS AT THE WINDOW. If the teller has made a mistake, you must correct it at this point, or forever hold your peace. The casino isn't going to allow you to come back and correct a bet once you leave the window.

There are many different variations of sports bets available to the bettor beyond the spread, total, and money line bets explained above (though those are the most popular). Many of these variations are detailed and probably outside the scope of the Sports Betting 101 blog post. That said, there is one variation that I would be remiss not to mention, and that is the sports parlay bet.

Because this bet is obviously much harder to win than betting one individual game, the casino will pay at much higher odds for a winning wager. You can bet a 2 team parlay (usually paying around 13/5) all the way up to a 10 team parlay (usually paying around 400/1) or even higher in some cases. Understandably, these are more "lottery ticket" type bets and the casinos love them for that reason.

In our example above, let's say we bet a $100 parlay on those three teams. The payout would be 6/1 or $600, which is more than the $300 we would have made individually had all three bets been made. Note, you can combine money lines, totals, and spread bets into parlays as well, so long as they aren't for the same game.

Betting a parlay is easy and very similar to normal bets. Just announce to the teller that you would like a 3-team parlay of 401, 403, and 408 for $100.00. That's it. He'll print your ticket and make sure to check that all three teams are correct.

Betting parlays is very fun, but also very stupid in the long run. Betting individual games is usually the way to go, but I won't judge you if you throw out a parlay every now and then. So long as you don't judge me too. 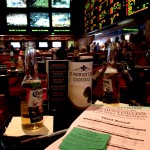 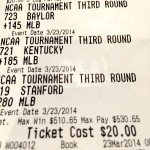 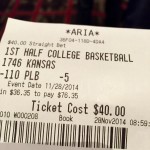 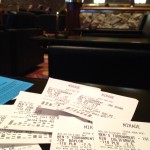 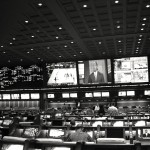 The vigorish ("vig" or "juice") is the house edge or house take on a sports bet. Remember earlier when we talked about how the line is set by an oddsmaker so that the underdog has a handicap making it a more even game if played to that spread? That's sorta true. But what's more true in setting the line is that the oddsmaker wants to set a line where there is equal betting on both sides of the line. If too much action is put on one side, the sports book is at risk of a loss. But if they're roughly even, the book always wins. Here's how.

Even though it doesn't say so on the board, all winning wagers on spread and total bets do not pay out 1:1. Instead, they generally pay out at -110 (this can vary by game, but that's the standard). In other words, you get paid $100 for every $110 you wager. How about another example.