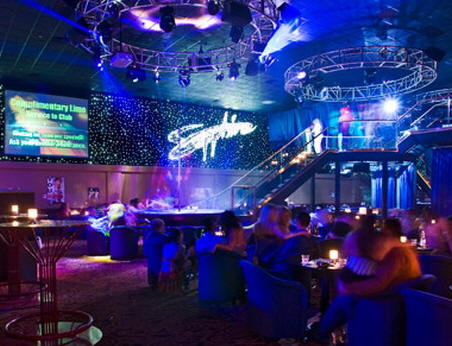 What Vegas blog is complete without acknowledging those things in Vegas that are among the world’s largest. One such thing is a strip club. And that strip club is of course the Sapphire Las Vegas Gentlemen’s Club. Featured in a number of television shows and movies, it is the world’s largest gentlemen’s club, at over 70,000 square feet of “topless entertainment.”

Opening in December of 2002, Sapphire was rumored to cost $32 million to build. But with skyboxes suspended 25 feet above the main floor, 10 private lounges with butlers, concierge, and themes, 3 main stages, and tons of VIP space, it appears no expense was spared.

Like most hoppin’ Vegas strip clubs, Sapphire has a fleet of limos that pick you and your crew up from your hotel and bring you there free of charge. Cover can be steep though, up to $30 for non-locals, but we’re told it is worth the price of admission if you like to throw away money. Especially for the conventioneer or ‘bucket-list crosser offer,’ this is one place you truly have to see to believe.