I must admit that "Let it Ride" has a dear place in my heart. It was the very first game "carnival poker game" I ever played and on the first time I played it, I hit a full house and won a considerable amount of money. I later learned the house edge (approximately 3.5%) doesn't exactly make it an advantage play, but it's still a fun little game. The good news is that it is very easy to play and is a fairly slow milking game, allowing you to take advantage of Vegas' fine drink services. Unfortunately, the game isn't near as popular as it used to be and it is getting harder and harder to find.

Consistent with the other gambling modules in this section, I want to explain the game as if you're a new player walking up to the table for the first time. That's the way I wish I had been taught, so I want to bring the same to you.

Take a look at the Let it Ride Table pictured. You'll see three circles in front of each player. When you sit down to play, you'll make make three equal bets and place them in those circles. For our purposes, let's say we're at a $10 minimum table, so we'll be placing $10 in each circle. The dealer will then deal each player at the table 3 cards, face down. After review of our cards, we will have the option to take back one of the bets in the circles. If we like our cards, we can decide to "let the bet ride."

The dealer will then turn one community card over, which will be placed in front of the dealer. Similar to a Texas Hold 'Em game, this card is used by all players at the table, adding it to their existing three cards to make a poker hand. After the dealer turns the first card over, we are again afforded the opportunity to take a bet back, or "let it ride." The dealer will then turn over a second and final community card, which will be used to finalize our 5-card poker hand. We are a winner if we have made a hand that contains a pair of 10s or better. We are a loser if we don't have 10s or better.

If you know basic poker hand ranks, the game is very easy to learn. The "letting it ride" concept is what makes it interesting. Let's say we are dealt Jack-Jack-Five to start. We already have a winner, so we'll tuck our cards under the first chip and "let it ride" because our hand can only improve from here. Conversely, let's say we are dealt King-Eight-Four. Letting our first bet ride would be silly because we will need a lot of help from the two community cards in order to have a winner. In that situation, we'd take a bet back and hope we get a King on the first community card. If we don't, we'll rake back again.

The game is slow because of all the actions that must be taken. And while it may feel like we have a big bet out to begin ($30), by the time we are finished with the hand, it could be $10. As a result, the game allows you to "take advantage" of made starting hands (and good drawing hands), and "surrender" when you don't. 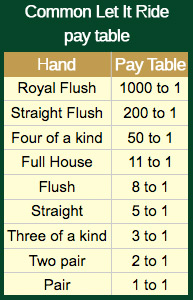 As for strategy in this game, I will turn to my favorite resource on the Internet when it comes to odds, and that is the Wizard of Odds Let It Ride Page. On that page, we learn several tips for strategy, which I'll rehash here, but encourage you to check out Wizard of Odds for more information.

With a starting 3-card hand, you should only "Let it Ride" when you have:

With a 4-card hand (one community card added), you should only "Let it Ride when you have:

Otherwise, you should pull your bet back. 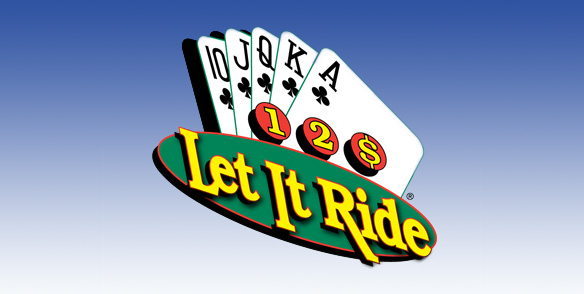 Consistent with every single game in the casino these days, casinos have introduced a variety of side bets that run concurrently with the game above. The most common is the $1 bonus bet, which you'll recognize as the single red circle above your bets on the picture to the side. Almost every player at the table plays this bet, and you will be encouraged to do so as well. It pays out an extra "bonus" for made 5-card hands. This bet has a huge house edge (depending on the pay table which varies from casino to casino). Should you hit a high hand, you will be sad that you didn't play this bet. Under just about every other circumstance, you'll be happy you didn't milk a dollar a hand into a bet with a 13% -- 36% house edge (Again, depending on the casino).

Another common side bet is an optional "3 card bonus" bet, which is the little diamond-y looking bet directly above the three betting circles. Similar to the above bet, just about everyone at the table will be playing this one as well, and will judge you for not playing it. Don't listen to them. This bet will cost you the table minimum most likely (so you're putting an extra $10 on this bet which you can't rake back). Generally, this bet pays 1:1 for a pair, 3:1 for a flush, 6:1 for a straight, 3o:1 for three of a kind, 40:1 for a straight flush, and 50:1 for a mini royal flush. This bet (assuming the pay table above) has a 7% house edge, roughly double the house edge of the regular game of Let it Ride.

This is a fun drinking game. A game that you can expect to lose most of the time, but still has a jackpot function (by hitting a high hand). My wife loves this game because it's easy, slow, and fun. Those words pretty much describe me too. Probably why we're married.